Ciphers of the Illuminati – complete version 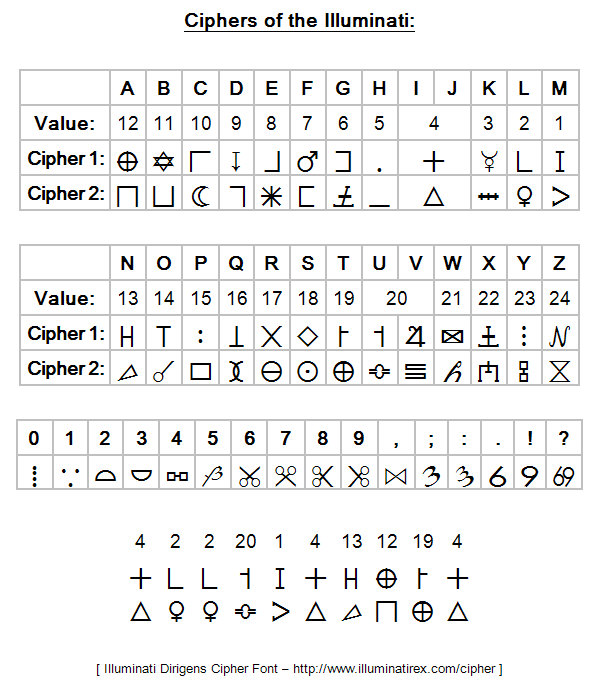 Posted by Luís Gonçalves at 6:55 PM No comments:

Thelema and the ridiculous search for an "English Qabalah"

As today I feel specially sarcastic and didn't write for a long time on my blog, I would like to leave here a message to all those thelemites that still today continue to search for an "English Qabalah", or that already use the NAEQ (New Æon English Qabalah) and believe to have in their hands the "Key to the Book of the Law" – which, in fact, is completely useless.


"Blasphemy! Ignorant!", the thelemites will shout... But you know something? Go self-fertilize yourselves... because I will give you the proof, using a key that is DIFFERENT from the NAEQ (oh no!!!), that will prove once and for all that Aleister Crowley WAS Jesus Christ reincarnated! (Oh Divine Irony! Oh Merciless Fate!)


It's true. According to the Cipher of the Illuminati, Aleister Crowley was the reincarnation of Jesus Christ. Does anyone doubt this? Watch and learn:

For all those who still can't believe it...

Well, I've chosen these examples just to show how an "English Qabalah" can give extraordinary results (read it like: Extra–Ordinary) making us believe that some kind of "truth" is hidden within it.

Obviously, this is a JOKE... but I think it illustrates quite nicely what I've just said.

Sweet ramblings!
Posted by Luís Gonçalves at 9:43 PM No comments:

This list represents a work in progress (with no previsions of being entirely completed) , and as such it will be constantly updated. The updates will always be made on the indicated link, changing only the date when the file is updated.

Numerical Key of the Illuminati Cipher:

The Real Symbol of the Illuminati


Contrary to what most people think, the Illuminati never used the All-Seeing Eye, or even the Eye in the Pyramid/Triangle as their official symbol. The only symbol they used in their private correspondences instead of writing the name of their Order was the Point within a Circle (ʘ). This simple symbol, however, has the particularity of being similar to an Opened Eye, besides having an extremely interesting meaning.

According to Illuminati Conspiracy Part One, by Terry Melanson (author of “Perfectibilists - The 18th Century Bavarian Order of the Illuminati”):

«The Order was, therefore, always represented in communications between members as a circle with a dot in the center ʘ This symbolic imagery - the point within a circle, the Perfectibilists and the Bees - is also reflective of Weishaupt's fascination with Eleusinian and Pythagorean Mysteries; no doubt learning of this early on having access to Ickstatt's considerable library.»

And now, quoting Weishaupt through Melanson:

«The allegory in which the Mysteries and Higher Grades must be clothed is Fire Worship and the whole philosophy of Zoroaster or of the old Parsees who nowadays only remain in India; therefore in the further degrees the Order is called 'Fire Worship' (Feuerdienst), the 'Fire Order,' or the 'Persian Order' - that is, something magnificent beyond all expectation.»

This is very interesting, because in the (not so) secret calendar of the Illuminati even the day of the Order's foundation was entirely connected to this same idea.

According to Abbé Barruel (“Memoirs illustrating the History of Jacobinism”, of 1797), the Illuminati used a 12-month calendar which was inspired on the Persian Calendar. The New Year fell on March 21st, which was the first of 41 days (from March 21 to April 30) of the month called Pharavardin. Next was Adarpahascht (May), Chardad (June), Thirmeh (July), Merdedmeh (August), Schaharimeh (September), Meharmeh (October), Abenmeh (November), Adarmeh (December), Dimeh (January), Benmeh (February), and Asphandar (March 1-20). They also counted their years from 630 AD, when Yazdegird III was crowned the King of Persia, so that, for instance, May 1st 1776 (Illuminati foundation) would have been written 1 Adarpahascht 1146 of the Persian/Illuminati Era.

This is very interesting, to say the least, because in the Zoroastrian (Persian) Calendar, the month Adarpahascht (Ardibehesht) was directly associated with fire worship, and the first day of every month is called Hormazd, from Ahura Mazda, the light/fire god of Zoroastrianism. Even the particle "ADAR" in Adarpahascht means fire in persian! As a little side note, notice that the other month of the persian/illuminati calendar that also contains the particle “Adar” is December (Adarmeh), in which was celebrated the Birth of the Invencible Sun, Mithra or Mithras, and now is celebrated Christmas. So it really seems that there is indeed a very deep connection between the Illuminati and Fire-Worship. The symbol for the Order of the Illuminati, the point within the circle, is just one more proof of this connection, being as it is traditionally related to the Sun, Fire and Light. As a curiosity I’ll also mention that the zoroastrian Karshas or Fire Temples have, when looked at from above, a distinct circle-dot configuration.

And now a quick note about how the Point within a Circle is intimately connected to the numerical Illuminati Cipher, as shown below:

(click to see larger version)
As seen on a previous post, the value of the word ILLUMINATI is 81, and as explained in this topic the official symbol of the Illuminati was the Point within a Circle. The funny thing is that in two other ciphers used by the Illuminati (also shown in the photos in this group) the Point within the Circle was one of two possible signs for the letter “S”, which, as we have seen, has the value 18 (81 reversed). Now 18 is 6+6+6, and the point within the circle is the astrological sign of the Sun which in the Jewish Qabalah is represented by - among other things - the number 666. Curiously enough, the letter “S” (=18) is the initial of words like Sorath (spirit of the Sun), Serpent, Snake, Satan, Saturn, Sator, Samael, Semyaza, and also Sun and Six (in several languages), besides being traditionally compared to a Serpent because of its crooked shape. I can hardly believe this is just an innocent coincidence. Maybe an interesting question to be made to some conspiracy theorists would be, for instance: “What is the connection between the Illuminati, the Sun, the Point within a Circle, the letter S, and 666?” They would be amazed if they knew the answer!

To conclude, here’s a list of meanings for the Point within a Circle:

- Among the Egyptians, it designated the Sun as creator god (Aton, Ra, etc);
- Ancient chinese pictogram meaning “Sun” or “day” (nowadays written as 日);
- Symbol of the “Eye of God” among primitive christians, and Huichol indians;
- Symbolizes Spirit among Chippewa indians;
- Primitive form of the greek letter Theta (Θ) which, for followers of Scientology, symbolizes the Eternal Spirit or “Thetan”;
- Alchemical symbol for Gold, sacred metal of the Sun;
- Qabalistic symbol of Archangel Michael, of a solar nature;
- Astrological symbol of the Sun (still used);
- Old chemical representation of an atom of Hydrogen;
- In Esoteric Astrology it represents the 1st of Seven Rays, the one corresponding to Will–Power;
- The Monad or Unity (God) in pythagorean mysticism;
- Qabalistic symbol of Kether, the “Crown” of the Tree of Life;
- Among Freemasons, the dot represents the individual Brother whose duty towards God and man is bounded by the circle. To this symbol they add two parallel lines that represent the two patron saints of Freemasonry: John the Baptist and John the Evangelist.
- Other possible meanings: center; heart; blood circulation; the backbone; political or religious leaders; the father; the phallus; union of the male (dot) with the female (circle); plant with a one year life cycle; the circumference of a circle; etc.

Aiwass - An alias for Crowley?

Greetings everyone,
It is commonly believed that the Book of the Law ("Liber AL vel Legis") was dictated to Crowley by a praeter-human intelligence called Aiwass. Crowley himself thought – according to chapter 7 of "The Equinox of the Gods" – that Aiwass was not only is Holy Guardian Angel (H.G.A.) but also a man like him. This is very interesting, and the Illuminati Cipher shows that Aiwass wasn't "a man like Crowley" but, in fact, Crowley himself. This, of course, would mean that Liber AL wasn't transmitted by any praeter-human intelligence whatsoever, but created by Aleister Crowley alone, the Great Wild Beast 666. Let's have a look at the following correspondences:
(All values are calculated with the Cipher of the Illuminati, unless stated otherwise)
This shows the equivalence between Aiwass, Baphomet (Crowley), and Sorath (the Beast 666), but of course it doesn't prove anything. It's just a numerical correspondence based on one single system of English Gematria, and it could be discarded by anyone as a mere coincidence. However, there is one verse of Liber AL that I think could confirm this hypothesis. In AL I:7, you can read:
AL I:7 - "Behold! it is revealed by Aiwass the minister of Hoor-paar-kraat."
So 'Aiwass' is the minister of Hoor-paar-kraat (that is, Harpocrates, the egyptian child god that represents Silence). This identification of Aiwass (= Baphomet / Sorath / Beast 666) with the "minister of Hoor-paar-kraat" could throw some light on the true identity of Aiwass, and indeed it does!
This means that not only can Aiwass be identified with Crowley and The Beast 666, but his office as "minister of Hoor-paar-kraat" confirms this identification. The Book of the Law was dictated by Aiwass, who was Crowley himself!
The name Hoor-paar-kraat is interesting too because it sums 169 (13x13) and one could conclude that the "Hundred and Sixty-Nine Cries of Adoration and the Unity thereof" in Liber CMLXIII ["The Treasure House of Images"] were directed to Hoor-paar-kraat himself! Also, 169 is the value of "Eye in the Pyramid", "Eye in the Triangle", "Annuit Coeptis" and "E Pluribus Unum" (these last two can be seen in the Great Seal of the United States, in the 1 Dollar bill), and also, curiously enough, "Illuminati + Bavaria".
As a final note, here's some correspondences for the number 93 (value of Θελημα / Thelema / "Will" & also Αγαπη / Agape / "Love" in Greek):
(Note the references and multiple correspondences between the True Will, Hoor-Paar-Kraat, the Eye in the Pyramid/Triangle, and the Pineal/Third Eye)
I seriously doubt these are just innocent coincidences... ;)
Best regards,
Luís (Alektryon)
––––––––––––––––––––––––––––––––––––––––––––––––––––
Posted by Luís Gonçalves at 10:50 AM No comments:

Hello friends,
This is a message that is related to an older post of mine, called "Ciphers of the Illuminati and the One Dollar bill", which you can read in Scribd.com:
http://www.scribd.com/doc/9792898/Ciphers-of-the-Illuminati-and-the-One-Dollar-bill
In this message (which will be structured in three parts) I'll show you some recent discoveries that I've been making while applying the Cipher of the Illuminati to the text of Liber AL vel Legis, the holiest book of Thelema.
In the meantime, as I presume some of you may be interested in this subject, I'll leave here a very curious discovery made near to March 5th.
Watch the Holy Sigil of the A.'.A.'. 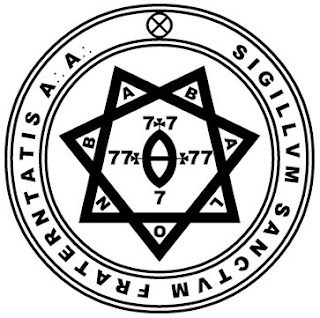 Ciphers of the Illuminati and the One Dollar bill